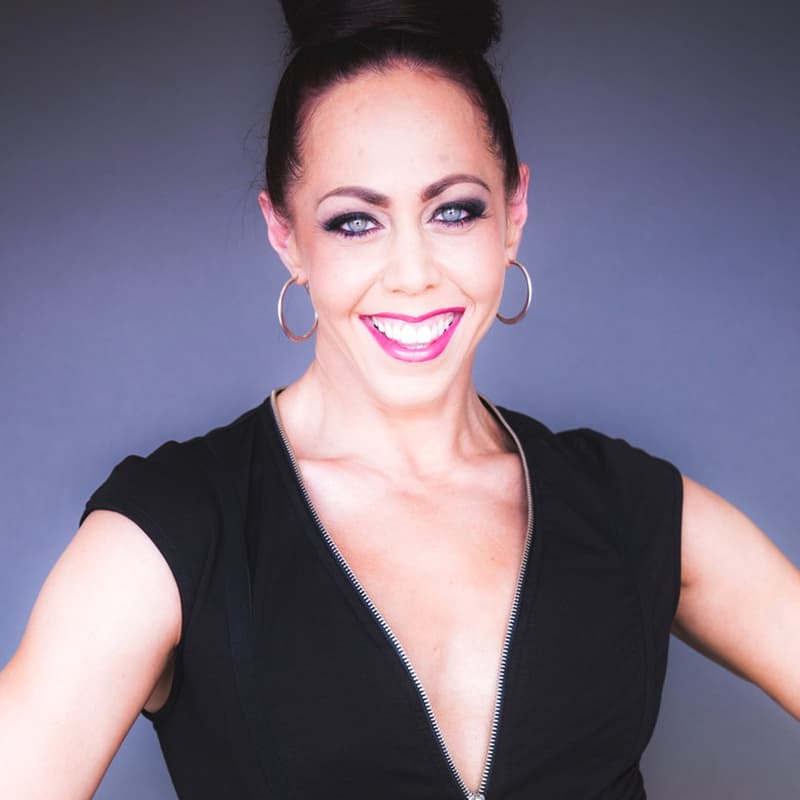 Johanna Sapakie’s passion for dance and love for choreography have always played an important role in her life. Her diligent work ethic and dedication to the craft have gotten her far in the ever-expanding world of entertainment. While coming from a strong ballet background, Johanna is an athletic aerialist and dancer schooled in a variety of forms including contemporary, jazz, hip-hop, lyrical, tap, modern, partnering, point work and aerial & pole acrobatics. She was trained from a very young age and has worked with such master teachers as Joe Tremaine, Debbie Allen, Liz Imperio, Marguerite Derricks, Wade Robson and Savion Glover.

More recently, on the performance side of her career, Johanna has been involved in many projects on stage and on camera including the newest Cirque Du Soleil shows in Las Vegas Michael Jackson ONE with Jamie King and Viva ELVIS with Vincent Paterson, Dancing With the Stars, the Arabesque Festival at the Kennedy Center, “One Love…” with Franco Dragone, Songs of Soul and Inspiration with, among others, Debbie Allen, Queen Latifah and Chaka Khan, MEIFF with Otis Salid, The Mexican Billboard Awards with Liz Imperio, Miss USA, The MTV Movie Awards, New Year’s Eve Live at Mandalay Bay, the first animated ring tone for “Boom di Boom di”, the lead female pole acrobat in That Rogue Romeo’s music video “Domino”, Jazz Dance World Congress, The Professional Dancers’ Society Benefit with Dick Van Dyke, Steps In Time for Disney’s California Adventure, Mental Head Circus with Terry Beeman, the Hysterica Dance Company with Bubba Carr, NY’s Performance Outlet with Dee Caspary, Gucci, Redken, Volvo and Tarbell Realty industrials, a featured female aerialist in Argentum Silvereye, photography for the Dance Resource Center and much more. Johanna has been a member of Liz Imperio’s Instincts Live Media Dance Company which has toured throughout the U.S. and Europe and Mark Meismer‘s Evolution Dance Company.

As an artistic director and choreographer, Ms. Sapakie has worked on the re-release of Michael Jackson’s “Blood on the Dance Floor” music video, So You Think You Can Dance, the music video “Medicine” for Jennifer Lopez, Miley Cyrus: Live in Concert, A Choreographers’ Showcase for Cirque Du Soleil, The Gioi Tinh Yeu with ASIA Music Group, Michael Jackson: A Tribute to the King of Pop and Michael Jackson at B.B. King’s Club, Jean Ann Ryan cruise lines, Viva Los Dodgers at Dodgers Stadium with the cast of tv’s Q’viva, the Upper Manhattan Lounge, Jazz Dance L.A., promotional showcases for EMI recording artists, choreography for professional dance companies, studios and schools around the world and much more. Also, Johanna has been an associate choreographer for Madonna: The Confessions Tour and Madonna: The Reinvention Tour, the Michael Jackson ONE birthday celebration for Cirque Du Soleil, Q’Viva: The Chosen with Jamie King for Fox and Univision, Latin on Ice for NBC, Your Mama Don’t Dance for Lifetime Television, Filippa Giordano: The Prima Donna Tour, Premio Lo Nuestro, the Latin Grammy Awards, the feature film Dus, industrials, burlesque shows, animated ringtones, showcases and performances for recording artists Jennifer Lopez, Marc Anthony, Sheryl Crow, Olga Tañon, Aventura, Jenni Rivera, Los Tigres Del Norte and routines for the Los Angeles Clippers, to name a few.

Along with performing and choreographing, Johanna takes much pride in her teaching. While always trying to expand her horizons, she teaches all forms of dance including contemporary, jazz, lyrical, ballet, hip-hop and tap. She has taught at studios all around the world for children and adults of all levels and abilities. Johanna also enjoyed teaching as part of the LADF family for many years and has guest taught on many other conventions. She has shared her knowledge and love for dance often at Edge Performing Arts Center and The Debbie Allen Dance Academy in Los Angeles and The Rock Center for Dance in Las Vegas, as well as many other places.

Johanna is also an accomplished aerial acrobat and performs on many different apparatus including tissú, lyra, spans, hammock, acro pole, and cube. Additionally, Ms. Sapakie performs a one-of-a-kind aerial dance act on an apparatus specially conceptualized and designed by Johanna herself called a double helix. She has performed and taught her aerial skills all over North and South America and the Middle East. She also was an integral member of the creation team of female acrobats for a unique spin pole act in Viva ELVIS and a one of a kind solo curved acro pole act in Michael Jackson ONE, both by Cirque Du Soleil.